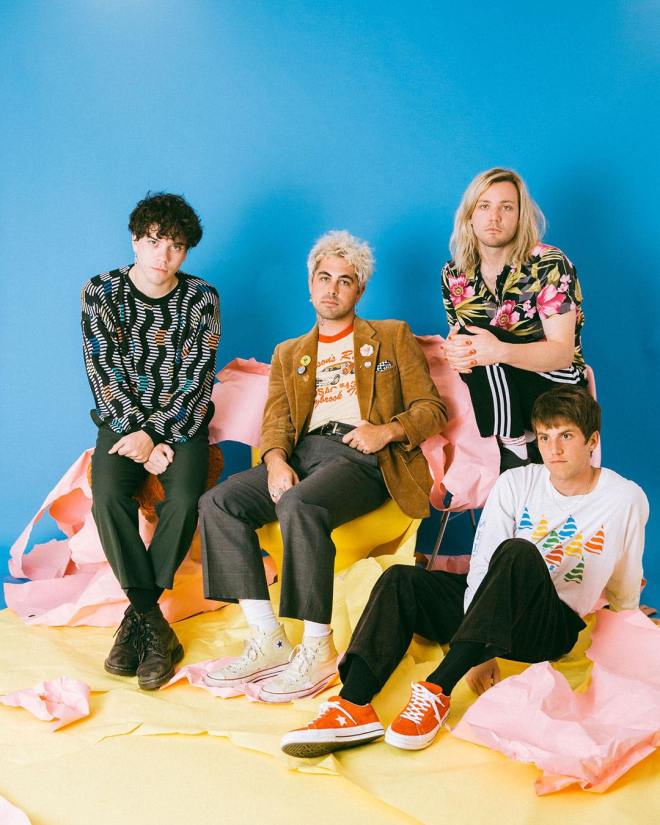 Rock With Horns – A Q&A with HUNNY

Going to a concert of the Californian band HUNNY is a very special experience. They meet all the criteria for the perfect indie band: charismatic with a touch of rogue, a front man who turns the stage into his dance floor, a flawless shredder on the guitar, a synth magician and a funky bass player. That’s why it’s fairly easy to be obsessed with them.

The band is made up of Jason Yarger (vocals), Jake Goldstein (guitar), Joey Anderson (drums) and Kevin Grimmett (bass, keyboards). These LA rockers are young and passionate about their music. Laura Weingrill met the humorous guys for an interview before their sold-out show at Shepherd’s Bush in London, where they talked about tour, the production behind newest album, and the fight for authenticity in the music business.

Laura Weingrill: How did your band start off?

Jake: Same old story. We’ve just all known each other forever. Jason and I lived together in a house and then everybody started to come to us and hang out and then this band happened.

Joey: Pretty boring origin story. Nobody got bitten by a radioactive spider or anything.

LW: How would you describe your band to someone who doesn’t know you?

Kevin: If you mean an older person, like a boomer, then we’re a rock band. But when we’re talking to someone who knows what we’re about, we do alternative rock.

Jason: I don’t like that one though. It’s so broad to say that. I never know how to describe us.

Jake: We make rock with horns.

LW: What do you dislike most about your job and what do you love most?

Jake: The industry behind music sucks. But that’s also the thing that allows us to play shows like tonight. Venues are only open because people buy tickets and drinks and come to concerts. That is also the catch 22. I wish every show could be five pounds, but unfortunately that wouldn’t work.

Jason: Tour is the worst and best part. It’s tough, but it’s also the greatest time. When we played a small gig recently, there were two girls from Japan at the show who go to school here in London. So they came from Japan and are here in England and we are also here and we are all very far from home and connected by this one thing – the music. That’s really cool.

LW: How does your production process work?

Jason: Basically, we sit around the laptop and play around with melodies and rhythms until it sounds cool. We don’t really jam with all our instruments in one room, because then everyone just worries about what they do personally. You feel like you have to add something even if the song doesn’t need it. That’s why we prefer to sit together and talk about what we have to add to a track instead of everyone doing something just to do something.

LW: From your album cover to your merch, everything you do looks really nice. I assume aesthetics mean a lot to you?

Jake: Yeah, we have a hand in pretty much everything. Jason designs our merch and album art and in general we talk about our visuals a lot. It’s definitely something we actively talk about and think about.

LW: Do you think that will ever change?

Jason: I’m too much of an asshole to let anybody else make any of our art for us. So probably not. I have a very tight grip on things sometimes.

Joey: He rules with an iron fist.

LW: What does the contact to your fans mean to you?

Jake: That’s the most important thing. It’s our favourite ethos – we come from loving DIY bands and punk bands, where the whole idea is the connection of the fans being a part of the greater thing that is the band. The fact that they have such a strong bond with our music and want to share their art and ideas with us means that they are as invested in the band as we are, if not even more. That means a lot to us.

LW: How do you try to stand out from the endless mass of bands?

Jason: I think we try by not trying. As lame as that may sound.

Joey: Being genuinely ourselves is going to make us stand out. Trying to be anything else will only make us look like doofuses.

Jake: Absolutely true. Those are the things in music that cut through right now. Things that feel genuine, that are authentic, that’s all people want. To know that something is real.

LW: What does music mean to you?

Kevin: I think it’s everything. It’s style, the way you act, everything.

Jason: Music took over my life when I was ten years old. It’s quite literally absolutely everything in my entire life right now. I was up on a night drive with our tour manager in the states a while ago and we were talking about how insane it is that some people are not like that. Obviously everybody is different but it’s so crazy that it’s literally the only thing I can think about. It’s made me homeless and happy and depressed and everything in my entire life revolves around it.

Jake: It has to mean a lot to you to give it a go like we are.

How NOT to Write About Music